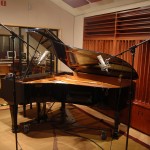 Piano For Film was founded in 2009 by Pat Rickey, composer, pianist and music producer, with more than 20 years experience composing for TV.

Pat had a desire to be able to license his recordings for use in Film and TV. With the help of fellow musician and classical pianist, Mike Curphey, they began to develop a catalog of music that featured the piano.

They placed a strong emphasis on the quality of sound as well as the quality of the musical idea. The recordings were performed so they would be able to underscore a Film or TV scene rather than being produced as virtuoso performance pieces similar to what you would hear in a concert hall.